Who is Rob Gutro, Medium/Author/Paranormal Investigator?

Rob Gutro is an author, paranormal investigator and medium with Inspired Ghost Tracking of Maryland. Since he was a child he could receive messages from ghosts or spirits (who have crossed over). As a scientist, he also provides some scientific explanations about how energy is the baseline for the afterlife and the medium that entities use to communicate. In 2005, Rob's late puppy passed and inspired Rob to write his first book and enabled him to communicate with pets. Rob participates in private paranormal investigations, helps ghosts cross over, and has provided countless messages from people or pets as ghosts or spirits. He lived in a haunted house, too!

***HIS BOOKS: Pets and the Afterlife, Pets and the Afterlife 2, Lessons Learned from Talking to the Dead and Ghosts and Spirits, Ghosts of England on a Medium's Vacation, Kindred Spirits: How a Medium Befriended a Spirit and Case Files of Inspired Ghost Tracking** BEST SELLERS- Rob's books have reached "best-seller" status on Amazon.com in various paranormal categories. All are available in paperback and E-book on Amazon.com ***DOG RESCUES - Rob has volunteered with with Dachshund and Weimaraner rescues since 2008 and is a pet parent of 4 dogs, 3 Dachshunds and 1 Weimaraner. He also prefers doing fundraising lectures for dog and cat rescues! JUST ASK… Rgutro@gmail.com

Paranormal Q&A: What is one of the most astonishing things you have experienced in your career? 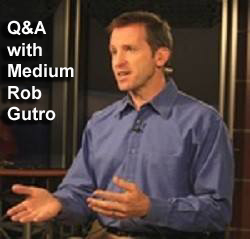 Each week, I'll answer a question about the paranormal, whether a general question, or one about human or animal ghosts (Earthbound) or spirits (crossed over). Here's this week's question:

What is one of the most astonishing things you have experienced in your career?

A: It's difficult to pinpoint one thing. In short, a couple of contacts and messages that stand out are my dad's spirit communicating at his wake and funeral (where I proved to my family I was talking with him); a paranormal investigation that turned into a double murder investigation where we found 2 ghosts in a home, the many signs and messages from my dog Buzz in spirit (who inspired me to write my first book), a dog named Buddy who gave me details about his favorite place overseas including his grandmother's name and pronunciation!

Most recently was the ghost of George Boleyn who walked me around a castle in England (in my latest book).  - Really, every message is amazing to me because it takes so much effort and energy for a spirit or ghost to convey them. 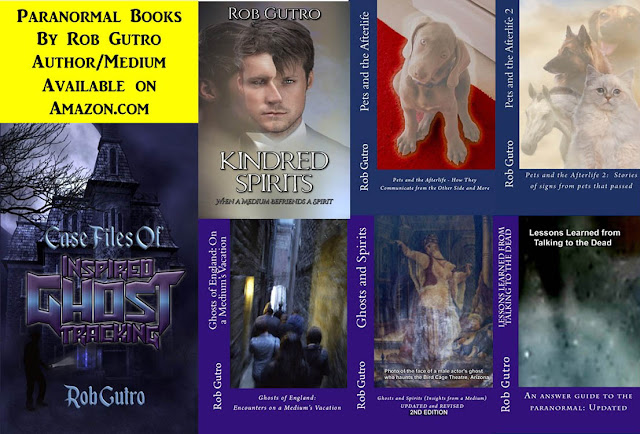 Posted by Rgutro at 5:30 AM No comments:

E-book Winner- Chosen By a Spirit on an Anniversary

Thanks to everyone for subscribing to my blog. Although the contest to win a free E-book of your choice is over, there will be another!
The winner of the e-book contest is Patty R. and as it turned out, she had help in winning from the spirit of her son Bryan.     As I have explained in my books, there's no such thing as a coincidence, and spirits come around on birthdays, anniversaries or holidays to let us know they are around.
Patty's son Bryan came around on the anniversary of his passing to let her know he's still very much around. Here's the story:

Patty said that she never wins anything. But this time she had her son Bryan's spirit on her side.
She wrote me and told me, "My son is in spirit and I’d like to think he had a hand in helping me win this book as a little kindness, a pick me up if you will. His death along with his boyfriend and one friend is coming up on 3 years 7/13/17. The person who killed all 3 of our boys was driving down an interstate highway on the wrong side going over a 100 mph."

When I received Patty's email, the way I choose her email all suddenly made sense. I realized that it was Bryan who made me pick her email.

WHAT HAPPENED - I have a list of emails from everyone who requested to get the blogs via email. So, I picked a number. As I started counting down the list, I kept hearing in my head, "give the book to the person after that number you choose." I thought, "Okay, that's a message from someone for some reason." That person was Patty.
HOW DO I KNOW IT WAS BRYAN? Given that it's a week out from the anniversary of Bryan's passing, I now know whose voice that was because spirits usually give signs they are around within 2 weeks before or after an anniversary. In this case, it was the anniversary of his passing.
He influenced me to choose his mom, so she would know she won the book because he helped out!
Patty said it was okay for me to share this great sign, and she sent me some great photos of Bryan and his boyfriend, both of whom are together forever in spirit. 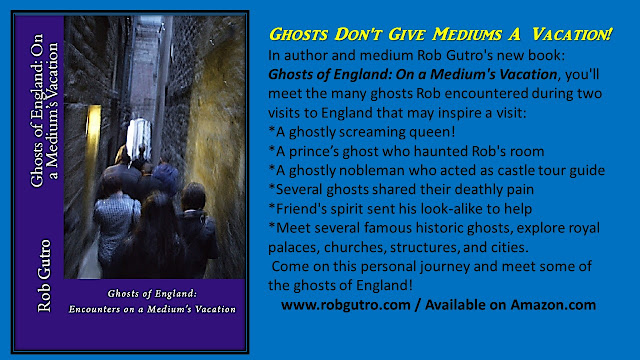 Posted by Rgutro at 5:30 AM No comments:

Paredolia: A Ghost Dog on a Grave?

A  video posted on social media really makes you stop and stare at what looks like the ghost of a dog standing on it's grave!  It turns out to be Paredolia. Today's blog will tell you what that is and show you the video


WHAT IS PAREDOLIA? Pareidolia (/pærᵻˈdoʊliə/ parr-i-DOH-lee-ə) is a psychological phenomenon in which the mind responds to a stimulus (an image or a sound) by perceiving a familiar pattern where none exists. It's like seeing a face in a cloud.

In the video, it turns out that it was two bunches of flowers that from a certain angle actually looks like a dog.
Published on Jul 31, 2017
DIY Prophacks published the video he took of what looked like a ghost dog. He said "I was riding by this pet cemetery and thought for sure there was a dog standing on this grave. Turns out it was just an optical illusion created by these dead flowers. I hope it came out ok on camera. RIP Kosmo. I never knew you but you made my day a little more interesting. No disrespect intended toward the dog or it's owners."
VIDEO: https://youtu.be/puulpvSRaME

For more about Paredolia, see one of my earlier blogs: http://ghostsandspiritsinsights.blogspot.com/2016/01/paredolia-and-seeing-paranormal-things.html
Posted by Rgutro at 5:30 AM No comments:

Email ThisBlogThis!Share to TwitterShare to FacebookShare to Pinterest
Labels: Paredolia

Host and medium Leo Bonomo of the Voice of Spirit paranormal show talked with author/medium Rob Gutro about how pets in spirit communicate from the afterlife. Based on his 2 best-selling "Pets and the Afterlife" books, Rob shares stories of amazing communications, and Leo and Rob took calls and did spot-on readings.
This is a 2 hour podcast that appeared on KCOR Radio. LISTEN:  http://kcorradio.com/Library/archive/the-voice-of-spirit/2020/june/rob-gutro.mp3